Last Friday I received an email from a lady in Southern England.  She was curious about a mushroom growing on a log.  I studied the photos but the fungus was immature and so all the characteristics were not visible.  I requested if possible an update with photos a few days later.

The following photographs were duly sent with very grateful thanks.

It became clear then, that the mushroom was an Oyster Mushroom.  Normally Pleurotus ostreatus caps can be variable in colour from light grey/dark grey/light brown/dark brown.  But these caps are almost black. There is a Pleurotus ostreatus with a blue/grey cap called var. columbinus.

It is uncertain without analysis if this is a true Blue Oyster mushroom var. columbinus, or just Pleurotus ostreatus with a black cap, but the photos are very good indeed and show the amazing structure of this beautiful mushroom and also the variations in the cap colour of this species.

Below are some photographs showing its growth progress over several days.
With very grateful thanks to J. Warren. 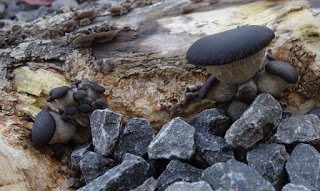 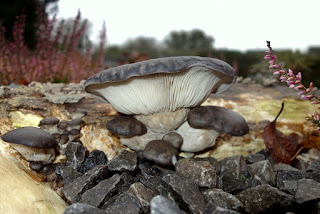