Last Saturday in the drizzle I set off on my bike to visit a friend.  En route she texted me to say she was running 30 minutes late.  Unknown to me at the time this turned out to be a blessing.

Despite the appalling light and heavy drizzle I decided to spend the 30 minutes killing time by visiting the nearby Attenborough Nature Reserve and search for fungi.   It was so muddy I had difficulty riding my bike. It  wasn't long before I passed by a willow tree low to the ground.  On a branch very close to the ground and obscured by a higher branch were two tiny little ochraceous fungi.

The cap being 1 cm diameter,  scaly and with a paler, fringed margin.  The stem being concolorous with cap but darker and with coarse scales.  Being curved and no ring.  My first impression was that it looked like a
Pholiota squarrosa in miniature.  Managed to get a few decent photographs despite the bad light and persistent drizzle.

According to the Fungal Records Database of Britain and Ireland, 235 have been recorded, 51 being in Scotland. 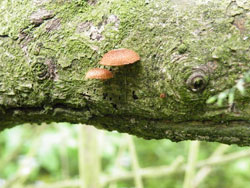 will be added to the database, making a third, now that a spore print analysis proves a positive i.d.  Thanks to Richard Rogers, Notts Fungi Group for carrying this out.

My images will be added to Browse 4 at fungiworld.co.uk in a few months time.


Well, the Queen celebrates 60 years on the throne and this weekend I up-loaded on fungiworld my 500th photograph of British fungi in 6 years! A mini achievement - hard work but still exciting and fulfilling.

The 500th image being one I cannot accurately identify.  If anyone can help me out please contact me. I think it is a Hygrophorus - it has all the characteristics ie waxy texture.  The stem is pure white with grey or black fibres scattered on it.  The cap is grey but peeling in places.

On a Winter walk during December along the canal path from Beeston to Nottingham I spotted a lovely fungi which might be Lepista sordida.  It was certainly an unusual colour being pinkish/lilac and brown all at the same time!  Also residing in a hedgerow which is characteristic of Lepista sordida.

Anyway, on reaching a suitable eatery, I rather enjoyed my mushroom soup! and garlic bread which sustained me for the return walk which was directly into the winter sunshine.

These can now be viewed on Browse 4.